July 2019 – Everything Real Estate and Pools!

It’s Summer Time and the Livin’ is Easy –  and Hot!  But if you have an inviting pool to cool off in, it makes summer all the better.  Even if you don’t have a Pool, it’s always fun to see images of them in wonderful settings.  I thought you might enjoy this article with gorgeous photos, all about, of course, The Pool!  Enjoy!

The Photographer Who Captures the World’s Most Iconic Pools

In a new book, lensman Tim Street-Porter and his wife, writer Annie Kelly, take us pool hopping in some of the chicest oases around the globe.

In “The Swimmer,” a 1964 short story by John Cheever, the master chronicler of American suburban life, a middle-aged father of four decides to travel across a New England town from pool to pool to pool. Cheever writes:

“The only maps and charts he had to go by were remembered or imaginary but these were clear enough. First there were the Grahams, the Hammers, the Lears, the Howlands, and the Crosscups. He would cross Ditmar Street to the Bunkers and come, after a short portage, to the Levys, the Welchers, and the public pool in Lancaster. Then there were the Hallorans, the Sachses, the Biswangers, Shirley Adams, the Gilmartins, and the Clydes. . . . Making his way home by an uncommon route gave him the feeling that he was a pilgrim, an explorer, a man with a destiny, and he knew that he would find friends all along the way.”

The journey of architectural photographer Tim Street-Porter and his wife, the writer Annie Kelly, has been a bit like that of Cheever’s hero (portrayed by Burt Lancaster in the story’s 1966 film adaptation). Since moving to Los Angeles, in 1978, Street-Porter, a Brit, and Kelly, who is Australian, have traveled from pool to pool to pool, making friends all along the way.

The journey, motivated by their shared love of swimming, became a professional pursuit as Street-Porter began photographing locations with an eye toward their latest book, Splash: The Art of the Swimming Pool (Rizzoli). Kelly, who wrote the book’s text, tells Introspective, “We were in France, and we stayed with our friend Barry Sloane — it was perfect timing because he has an absolutely stunning pool.” This classy rectangular pool was designed to complement the perfect Palladian proportions of the former farm building that Sloane, an L.A.-based realtor and art collector, had converted into a guesthouse at his Château de Cardet, near Nîmes and Montpellier.

A few months later, Kelly continues, “Isabel Goldsmith invited us to her hotel for the New Year.” The mining heiress’s resort, Las Alamandas, on the West Coast of Mexico between Manzanillo and Puerto Vallarta, is a swimmer’s paradise. Goldsmith “has at least three pools on the property that I can think of, so that was wonderful,” says Kelly. As constant travelers, she notes, “we just added pools as we went along.”

While Street-Porter was shooting, Kelly often got to swim and even play the role of swimsuit model. “Several times, she made her way into a shot. As the author of the book, I guess she’s entitled to do that,” Street-Porter reports, adding gallantly, “She reliably enhances every picture.”

Otherwise, the book is free of people, which is a shame. It would be nice to see Cher swimming in her pool in Malibu (in the singer’s absence, a large Buddha presides) or Diane Keaton in the pool of the 1928 Samuel-Novarro House by Lloyd Wright (Frank Lloyd Wright’s son), which she renovated about a decade ago. Or better yet, Ellen DeGeneres and Portia de Rossi in their marble-walled indoor spa. 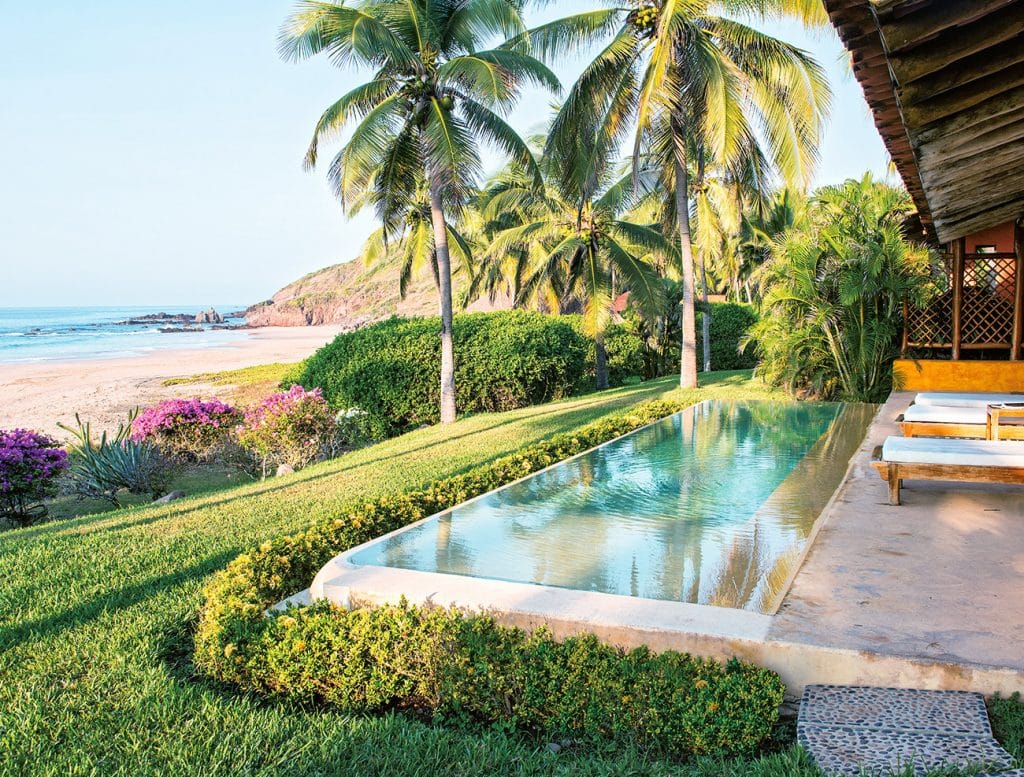 A small infinity pool adjoins one of the casitas at Isabel Goldsmith’s Mexican resort, Las Alamandas.

The pool at Silvertop, a 1957 home designed by John Lautner and located in L.A.’s Silver Lake neighborhood, may have been the first with an infinity edge. 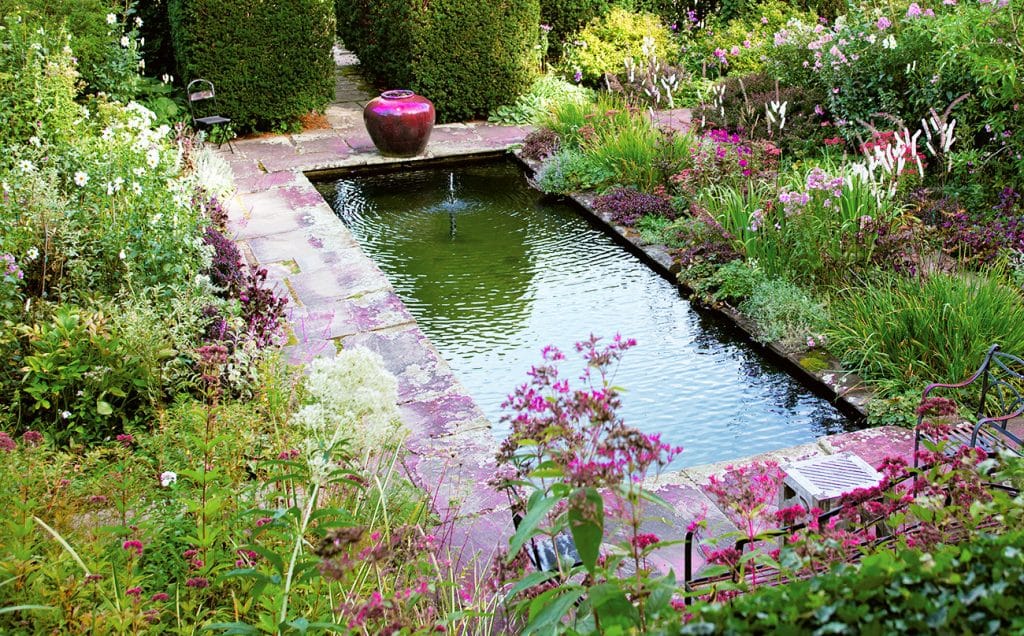 Plantings along the edge of the pool at Hollister House Garden, in Litchfield County, Connecticut, give it the feel of an ornamental pond. The property, which owner George Schoellkopf modeled on traditional English gardens, is open to the public each summer. 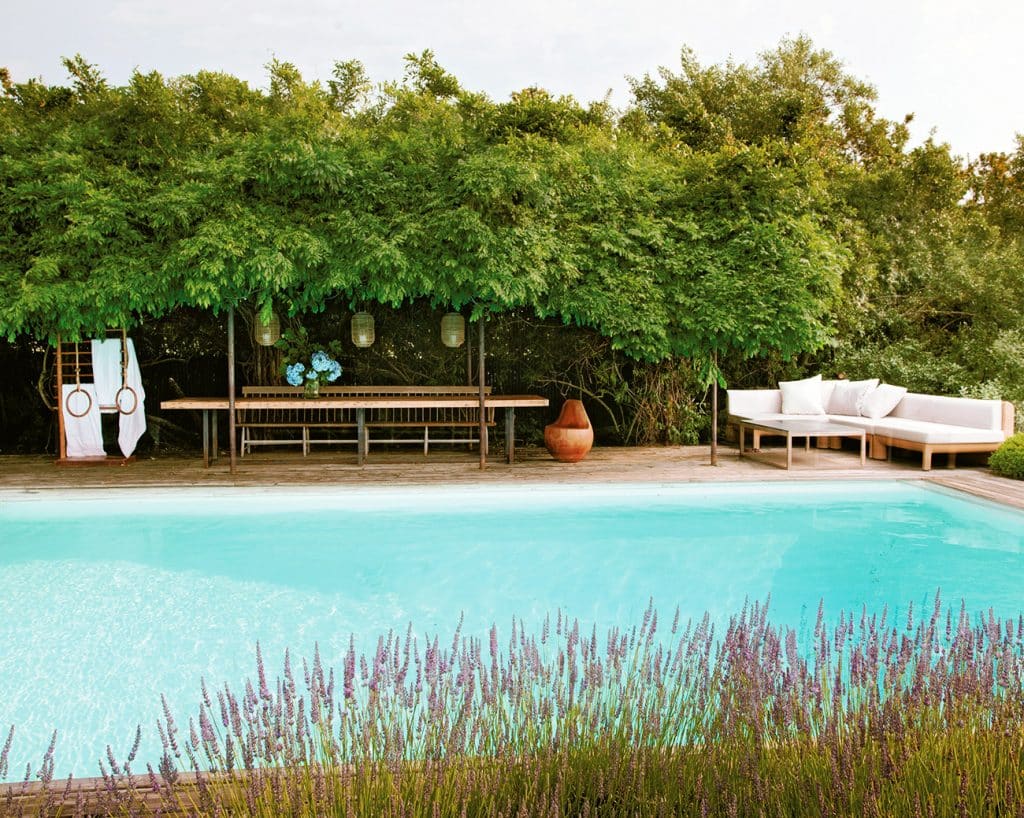 But the only star here is design. The 200 or so pools, most of which were captured over the years by Street-Porter while on assignment for magazines, give the reader a lot to dive into. The book is divided into (somewhat overlapping) categories: There are “architectural pools,” conceived along with houses by the likes of Luis Barragán, Richard Neutra, Frank Lloyd Wright and Oscar Niemeyer(his sole residential U.S. structure, in Santa Monica) and by such younger talents as Chip Bohl, Steven Ehrlich and Mark Rios. Several of these pools are by John Lautner, who saw them not just as places to swim but as ways to dramatically link indoors and out. The most extraordinary Lautner pool may be the one beneath the cantilevered roof of his Sheats-Goldstein house, now owned by LACMA.

There are also “garden pools,” some with lush plantings running right up to their edges. The prettiest of these may be the one at Hollister House Garden, in Washington, Connecticut, which is owned by George Schoellkopf and is sometimes open to the public. And there are “infinity pools,” a type Kelly believes was invented by Lautner for his 1957 Silvertop house, overlooking L.A.’s Silver Lake Reservoir. Several examples of this category are by the late Made Wijaya (born Michael White), an Australian who became one of the most respected landscape designers on Bali and who was a close friend of Street-Porter and Kelly. His work includes the pools at the Four Seasons Resort Bali at Jimbaran Bay, each with a view of the ocean, and the pond-like ones at Taman Bebek, inland at Ubud. Then there are the “fantasy pools,” a category that could include almost every pool in the book but is reserved for over-the-top creations like Gianni Versace’s ornately decorated version in Miami and the one at the foot of a cascading garden designed by Robert Couturier for the main house at the Cuixmala resort in Mexico, once the home of Sir James Goldsmith (and not far from daughter Isabel’s Las Alamandas). These are folks who see the pool at William Randolph Hearst’s San Simeon as a starting point.

As for Street-Porter and Kelly, almost any kind of pool will do. “I’m happy wherever I can swim,” says the photographer. And Kelly’s favorite is “whichever one I’m in right now.”

The couple can’t build a pool at their house in the Hollywood Hills because there isn’t enough flat ground. They decided not to have one at their second home, in northwestern Connecticut, where, they say, the summer is too short. And they don’t need one at their third home, in Sydney, because there are public pools and beaches all around.

That makes three houses, no pools, for the creators of a glorious volume about swimming venues. Surprising? “Maybe it’s better that we don’t own a pool,” Kelly muses, “because this way, we’re always on that journey, looking for that perfect pool.”